I’ve been trying to write an update since we got home from the hospital Friday evening, but we only had one night that Kaylee went to bed and stayed asleep in her bed. Chris and I were able to cuddle up and watch a movie together….the rest of the nights have beena bit difficult. I was waiting to write about positive things that were happening..but today has just been I guess a breaking point.

To catch up ~ Kaylee was given a potent Methotrexate drip in the hospital and I was in awe of the fact that she never threw up once. (Praise God) She wanted to play all over the place and I was doing all I could to keep up & follow closely behind her with her pole of IV’s she was attached to. I posted pictures of her hugging her favorite Nurse Amanda, and her learning how to use a stethoscope with sweet nurse Kara. She would run up to the Christmas decorations and hug the fake reindeer, (run away from Santa) and squeal with happiness every time we walked down to the massive toy choo-choo train a family donated to the hospital. The Dr was pleased with how well Kaylee “cleared” the Methotrexate (we could only be discharged if trace amounts of methotrexate were seen in her blood test.) She was on 48 hours of fluid after the chemo to get that nasty poison out of her body as quickly as possible & protect her kidneys.

A ray of sunshine in the form of a sweet 12 year old was at the AFLAC section at the hospital getting chemo when Kaylee was. Kayla and Kaylee met at the clinic a few months ago (Kaylee was pushing around a kid sized grocery cart of fake fruit when she stopped to say hi to Kayla, and it was instant friendship!) Whenever Kayla sees Kaylee she makes a point to say hello. Well Kayla has the sweetest most giving heart of anyone I have ever met and her mother Maureen is just as amazing! I made a comment on Thursday to Maureen about Kaylee playing with Chris’s phone and calling Chris’s coworkers and his boss. (oops!) I let K use my phone and she deleted a few apps and phone numbers, so I was jokingly rolling my eyes to Maureen about trying to not let K see our phones. I had no idea that Kayla and Maureen were already planning something special for Kaylee. They had made a call to an AMAZING local organization called TEAM SUMMER. (Check them out!) Kayla was a recent recipient of a TEAM SUMMER gift, and she wanted Kaylee to be one as well. We were taking K on a walk, and when we walked into our hospital room, there was sweet Kayla on the sofa, Maureen, Summer’s mom Lynn and a photographer of TEAM SUMMER! Kaylee saw Kayla and instantly smiled and said “hey bud-dy!” Kayla read a beautiful card from Team Summer about what was going on and handed Kaylee a wrapped gift. When Kaylee unwrapped the gift, she learned that she was given her very own IPOD Touch! It looks just like an iPhone but she can’t make calls. She can download apps to play games & songs to dance to when she is bored at the clinic or the hospital! We were blown away by the thoughtfulness and kindness of not only Kayla and Maureen but Team Summer! They even bought her an indestructible case for it! I cannot even tell you how many times this has already come in handy! A huge Thank you to Kayla, Maureen and Team Summer! We are so thankful! Please pray for sweet Kayla as she continues to fight her very own cancer battle!

The wknd went pretty well. Chris and I were determined to try to knock out a few Christmas gifts for family because we are acutely aware of how soon we will be back in the hospital. In this phase of K’s Leukemia battle (Interim Maintenance Phase.) We will be back in the hospital for 4 days every two weeks for two months for the Methotrexate drip. Ugh. Kaylee had a great weekend and minus not sleeping well, we all have really enjoyed being home. I noticed her tugging at her mouth a few times Saturday night and immediately knew she was probably getting mouth sores from the chemo. Then, out of nowhere that evening when she woke up 20 min after I put her down to bed in her crib, she started gagging like she does before she gets sick. Chris ran, and grabbed her out of the crib yelling to me to call the clinic. She started dry heaving, crying and saying “uh oh!” The clinic told us to give her Zofran (which we were doing at that time) and to know that this was a normal side effect from chemo. We should call them back if she got sick after getting Zofran. The whole thing scared Kaylee and she stayed wide awake until 11pm. I finally laid her down in her crib and she slept great until 2am. She woke up crying so we just put her in bed with us, and (this part is awesome) we all slept until 9:45!! Chris and I were very thankful!

Sunday night she woke up pretty much hourly, and we finally gave up at 12:00. (Chris and I are night owls so it isn’t uncommon for us to be up till 12:30 or later every night.) She came to our room, watched the last 30 min of some sappy movie I conned Chris into watching and kept US awake trying to play until 2am.)

So that brings us to Monday. Monday wasn’t one of the best days to put it mildly. K woke up smiling and asking me for orange juice. With her on my hip, I got her cup of juice while getting coffee for myself. She smiled, took one sip of her favorite orange juice, looked at me like I had shot her and dropped the cup, grabbed her mouth and started crying. Oh crap. Totally forgot she probably had a mouth sore…ouch! I filled another sippy cup with milk, apologized to K over and over and carried her upstairs trying to calm her down. The rest of the day just went downhill. A dear friend of the family came over so I could assist her in making her annual Christmas cookies that she gifts to her friends. It is a tradition I have helped with since I was young. Sherry ended up practically making all the cookies by herself because I was tending to a very teary, very upset little girl all morning. If I so much as put Kaylee down, she would grab at her mouth and fall down and cry. It was very sad to see & Kids Tylenol wasn’t helping. Sherry tried cheering Kaylee up, but K was flat out unhappy. She refused to nap when I attempted that, and didn’t want to eat anything. By the time Sherry left to head home, I was exhausted trying to come up with something to keep Kaylee distracted, who at this point was grabbing at her tummy saying “mommy…hurt!” I was silently becoming increasingly angry at chemo; this poison that was supposed to kill this terrible disease, but was also causing my small child so much pain! I felt helpless and so badly wished I could do something to make it go away. For the millionth time, I wished I was given this cancer and not her. I was so thankful when Chris came home a bit early, and after watching my child in pain all day, I just went outside and cried. So drained. We went out for a quick shopping mission to buy a new Christmas tree star, and all Kaylee kept saying was “I go home” (she wanted to go home.) She didn’t eat much at all for dinner (we tried all mild foods) and when we put her to bed, she woke up four times, before coming to our bed at 2am.

I am blessed to have become friends with a nurse at CHOA. Today she told me about Magic Mouthwash for people with mouth sores. It has Benadryl, Mylanta and Lidocaine mixed in and I could swab Kaylee’s mouth with it! It would hopefully soothe her mouth. Eager to try anything, I immediately asked the clinic to call that in for Kaylee, and picked it up. Although it didn’t seem to help much tonight, I am looking forward to it helping more the next few days, so we will see.

We have been so blessed to have so many good days that we have had, but this week has just been very tough. As a mother, I so badly want to take any and all of her pain away, and it is so hard to watch. Chris and I are both stubborn people and I finally feel like that characteristic will help us. We will keep trying anything we can think of to help our 21 month old daughter get through this phase. We will just keep praying and fighting for her. Today while praying I said God you are so MUCH bigger than cancer, so MUCH bigger than mouth sores! Please heal them!

We ask that you help us pray our daughter’s pain away; pray that God will heal her mouth sores. We are praying for rest, for her to be able to eat, and most of all that God will heal her from this cancer! I remain faithful that this is just a battle that she will beat, and will come out as a living testimony of Gods graciousness!! Thank you so much to our prayer warriors & readers of our life! This week is tough on us, but as my mother keeps reminding me “This too shall pass.”

JEREMIAH 29:11 ~ “For I know the plans I have for you,” declares the LORD, “plans to prosper you and not to harm you, plans to give you hope and a future.” 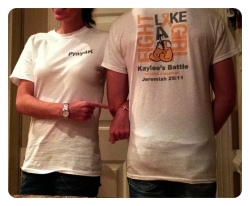 All Proceeds Will Be Split Between Childhood Cancer Charities & Kaylee's Cure Party!